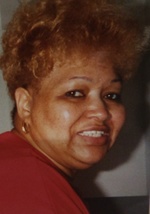 Myrtie was bom on April 1, 7947 in Andalusia, Alabama to the late Nina Monroe Sparrow and Everett Poindexter, Her Childhood and teen years were spent in Crestview, Florida. The family moved to Long Island, New York where she attended High School and was a basketball player. After relocating to Rochester, New York she continued her High School Education and graduated from James Madison High School in June 1967.

Myrtie accepted the Lord as savior at an early age. She was a Founding member of First Church Divine, Non-Denominational. lnc., under the leadership of the Rev. Dr. Lloyd T. Oldham. She was an active member, a Trustee and member of the Pastor's Aide Society.

Myrtie was employed with the Xerox Corporation for 34 years. After her retirement she devoted her life to her children and grandchildren. She was a great cook and enjoyed cooking for family' gatherings especially cooks in the summer and shopping . . .

Myrlie transitioned from this life on Tuesday, February 19, 2019.

All rights reserved. This obituary is also archived at obittree.com